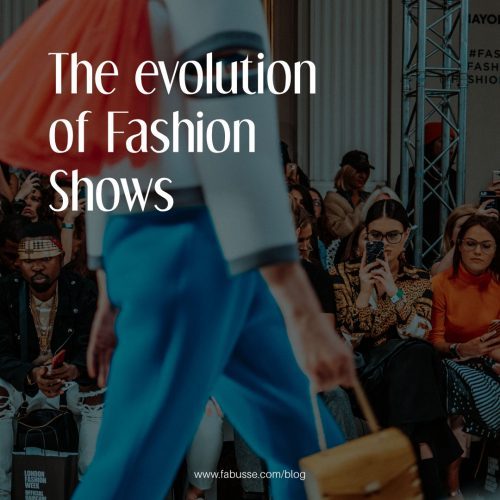 At about the turn of the 19th century, fashion shows were nothing but just marketing modes of designers to attract their preferred clients into getting their latest designs. Imagine the year to be late 1800s. The trend then had been for designers to have women wear their latest designs and have them walk around racetracks and other public places to be noticed, photographed, and eventually be reported by the media.

Over the years, this “fashion show” evolved from the racetracks to designers getting in-house models that are made to walk around the shop in the designer’s latest creations while the patrons sip tea and contemplate which of these creations they will surely get.
It was only on the first decade of the 1900s, however, that the concept of fashion parades gained popularity. With shows that usually last about three hours and are shown continuously for several weeks, these fashion parades have ensured that exposure is maximized up to the middle class.

It is also during these years that fashion models are introduced not by names but by numbers. These numbers correlate to the designs they wore, making it easier for the clients to keep a tab of what they want to buy.
The 1960s and 70s show a change in how fashion shows were done. It was during these decades that fashion models evolved from walking with a stone-faced expression to being fun and light. It was obviously a ploy to attract the youth-market as the number of clients interested in couture has dwindled down. It was also during these decades that designers made popular ready to wear designs targeting the masses.

Over the past few decades, fashion shows have been regularly done – with fashion weeks in almost every key city of the world hosting their own fashion weeks, featuring the best designers the city has to offer. There are also the widely-televised, star-studded shows like that of Victoria’s Secret, a success that started way back in 1995.

Although there are a few designers who can obviously turn heads and attention just like how the late Alexander McQueen did it during his time, once in a while, a designer or two surprises the fashion world with theatrics that stun and awe the industry.

It could be because of sheer creativity and the lust for risking ridicule for a not-seen-before kind of show, or it could be because of the help of fashion agencies like Fabusse that provide the expertise in organizing fashion fairs and shows that could make the brand.

No matter the reason, fashion shows have evolved from models walking in racetracks to the lively fashion festivals of today. And the evolution does not stop there. I just think in terms of fashion shows, the best is still yet to come.