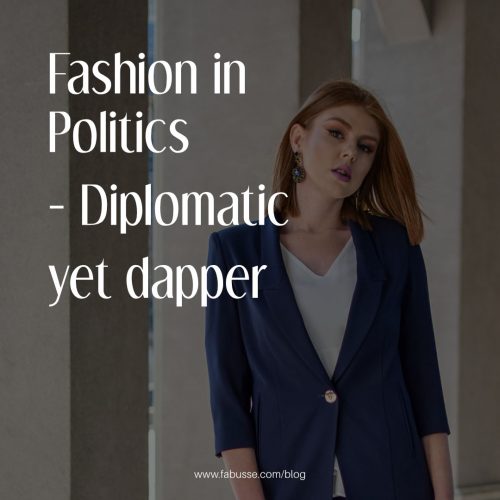 “Fashion” is most of the time a word associated with runways, designers, and glamorous celebrities. But when you say the word fashion, where does politics mix in? The both may, at first glance, look like opposites but if you look closely, there is a certain high level of fashion even in the world of politics.

Dig deeper and you will find that every piece of garment have been meticulously thought of, each clothing considered. Politicians have a much more emphasis on perception management than any of us know.

Jackie Kennedy, for example. She was perhaps one of the most beautiful faces to ever grace the White House; and at 31, she definitely made her statement with her fashion choices. When you think of pillbox hats, white gloves, pearls, it is always Jackie Kennedy that comes to mind.

More than her showcase of glamour, she influenced women of those times to favor sleeker creations. Out with the prim dresses and overly styled hairdos that were so popular in the 50s. In with the Jackie Kennedy contemporary designs.

And what about Michelle Obama? Entering the White House, she brought along with her a fashion trend that’s just not exclusive to the rich and powerful but to the masses. Who can ever forget what she said about clothes purchased online? It was not just that the clothes looked good on her; it was because her fashion sort sends a message to women everywhere that “hey, you, too can sport this dress as best as I do!” And what better time to make the statement than at the time when finances of most Americans were dim.

The world of politics may be thought of as a world of promises, cunning friends, dog-eat-dog culture but little did we know fashion has a say on how we perceive these politicians. Not only is it about perception but politicians also tend to sometimes wear clothes that send an image.

A very good example of this is Hillary Clinton who wore her signature pantsuit, in white, during the inauguration of President Trump. As we all know, white is the color of the suffragettes – a color of purity. It is also to protect them from their opponent’s claims of immortality (Vanity Fair).

And with all the meetings and projects and interviews in tow, how do these politicians even have the time to think about what to wear? Well, I speak for most (but not all) but these politicians always have a stylist and fashion guru in their employ. Fashion experts like Fabusse always benefit to have their recommendations catch a politician’s attention. Because at the end of the day, it is a fashion expert’s opportunity to showcase what he or she can really do.

So, the next time you see a political figure descend the stairs of the city hall, look closely. Because somewhere behind those skirts or pearls or whatever your local (or national) politician is wearing, is a statement.