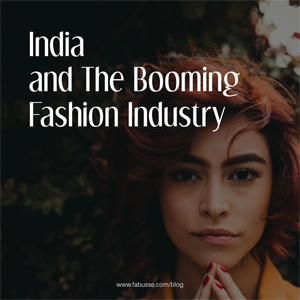 India’s growing economy has been eyed as a central point in the fashion industry. The country’s ever-increasing middle class, coupled with its strengthening manufacturing sector both make up a potentially strong economy of the future. In a generation of online shopping being one of the most popular means to purchase clothing, India’s population is also becoming more tech-savvy which makes the country hard for international fashion brands to ignore.

While most economies fatten across Asia, that of India is expected to take the spotlight with its GDP growth before 2022. With the continued rise of the middle class that can potentially beat that of Mexico, Brazil, and even China, the demand for its consumption is getting its leverage in the past few years.

India has one of the largest apparel markets in the world, what with the emergence of the gold collar population; the gold collar being those that are well-paid professionals whose happiness lies in looking good. This, in turn, affects the fashion industry. It is no wonder that more than 300 international fashion brands are set to open stores in India in the coming years. Fashion experts like Fabusse are also always on the lookout for everything beautiful that India has to offer.

Part of this growth can also be attributed to another reason and that is lower labor costs as compared to that of China and Vietnam. The country is also home to a wide array of materials that are not only available in abundance but also come cheap. Materials like cotton, wool, and silk make it easier and cheaper to import textile and apparels from India.

However healthy India’s fashion industry is, a brand must always have an understanding of the complex market of the country. This huge land is comprised of four major parts – north, south, east west – all of which have their own demands when it comes to fashion. For example, the northern part is the only part of the country that experiences winter, thus, the complexity of the market.

Brands that have attained success in the Indian market have dug deeper into how Indians consume, particularly in fashion. What may be popular in Paris cannot be marketed in these parts of the world. A certain balance of culture, tradition, and modern style is getting more popular in India than anywhere else in the world.

With Indian players in the fashion market innovating, putting more attention to technological advances that result in a more efficient purchasing experience, India is now emerging as one of the strongest playing fields in the world of fashion. It should also be interesting to note that technology is now accessible to millions of India’s population, giving rise to a large group of tech-savvy consumers, resulting in the growth of the apparel sector.

While India is a country of culture and mystery, one thing is finally unfolding – that this country is putting their more than 1 billion pairs of feet forward in the name of fashion.