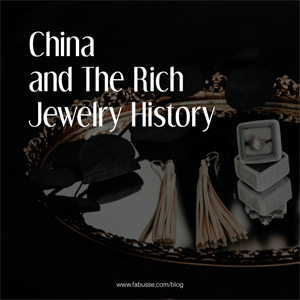 Since the beginning of time, humans have been wearing jewelry not just as an expression of one’s individuality but also as a show of social status. From centuries when tribes wear stones and bones to the modern jewelry of today, sporting your favorite gems and stones have never failed to show the world one’s social standing and style.

Out of the many civilizations from all over the world, that of China is considered to be one of the oldest. One of the many traditions of such a civilization is burying its dead with its wealth. It is thus expected that such jewels, when unearthed, have been preserved and stood the test of time.

Over the many centuries, different styles have managed to evolve depending on the region and era in Chinese history. But while the styles have changed over the millennia, the overall materials have not changed one bit, as what has been revered in the past are still glorified today.

One such example is jade. Jade, considered to be a spiritual stone, gives the person wearing it a link to his ancestors and the world beyond. Jade can be carved into many beautiful designs of animals and different Chinese symbols. Aside from the protection it supposedly provides, jade is also a symbol of wealth and social status. Depending on the color of the stone, jade can either make or break your social standing. For example, a blue jade dragon equates to royalty and should be revered high based on Chinese societal standards. A clear white jade is also another symbol of wealth and power. As such, jade as a necklace pendant, bracelet, ring adornment, or hairpiece is quite common in ancient and modern China.

A jade phoenix is also another one of those popular Chinese designs. And sure as the phoenix rises from the ashes, a jade phoenix symbolizes new beginnings.

In ancient times, Chinese jewelry pieces have been made for Western markets. Fashion-affiliated organizations like Fabusse often put jade, among others, into high regard and never fail to adorn their clients with the best of Asian, much more Chinese, jewelry pieces. From bangles to pendants to earrings and intricate headpieces, Chinese jewelry, especially those made of jade do not seem to have plans of settling down anytime soon. From the times when it was exported during the Victorian era, chances are that Chinese jewelry is set to conquer not just the West but the world.