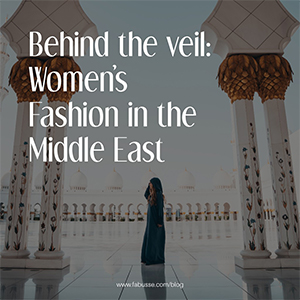 When discussing designer brands and the latest fashion trends, what comes to mind are cities like Paris, Milan, and New York. Never have the fashion public known that with baby steps, the Middle East has become the birthplace of the hottest new trends in town. When it comes to this region’s fashion in women, the first thing that comes to mind is veiled women.

Actually, the hijab is not just a religious piece of clothing. Recently, wearing the hijab means making a courageous statement in the current world of fashion. It is no longer a religious garment but a statement as to women showing the decision to wear it, to cover the parts that they want, and to dress up as to how they feel like dressing up without putting themselves under pressure of society’s expectations.

It has changed the image of a Middle Eastern woman from being the submissive family member to somebody bound to make a difference in this world. And change they make, especially in the fashion industry where fashion designers from the region are now making waves in the industry. Names like Yasmine el Said, Zhor Rais, and Farah al Asmar have been getting popular lately. The same is true with brands like Elie Saab, Noon by Nour, Georges Chakra and Georges Hobeika that have been getting the nods of Fabeuse and other fashion experts.

Even Instagram and Youtube have their own shares of fashion influencers from the Arab nations, making suggestions of the freshest ideas in terms of clothing. Long skirts, flowy dresses that recreate the looks of the 50s and 60s have been the latest so far; long poodle skirts without looking outdated for instance.

In some countries, women are now saying goodbye to shorts. The realization that there is no need to show off some skin in order to look fashionable has given way to long and wide-length trousers, the baggy jeans or the wide-length office pants.

No matter what women wear in the Middle East, the newest trend as of late is in finding the perfect hijab. Hijabs with bold colors and varying fabrics or probably a uniquely-shaped scarf, this piece of clothing has already inspired and encouraged millions of Arab women.

While fashion for women has been changing in the Middle East recently, Arab women still go for modesty and adheres to keeping their bodies kept from the public. Flowing clothes and modest outfits plus a hijab of their own choosing is becoming the new norm in terms of fashion.

Remaining modest while being fashionable has been empowering women in this region. It lets them take control of their bodies while staying true to how they want to dress; but still giving a certain amount of freedom to be as bold and daring as fashion and modesty allows. With the current fashion trends changin, being modest in the Middle East has never been this grand!